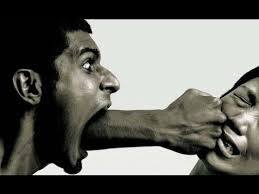 And the First Person we destroy with our tongues is Ourselves!

But verily, over you are appointed angels to watch over you.  Kind and honourable, writing down your deeds.  They know all that you do.

Not a word does he (or she) utter, but there is a watcher by him ready (to record it)

And his companion (angel) will say: “Here is (his record) ready with me!”

33:70.   O you who believe! Have Taqwa of Allah and speak (always) the truth (a straight forward word, a right word, a just word.)

In this ayat, Allah is warning us to fear Him as He should be feared and then He tells us to always speak a straight forward word.

Brothers and Sisters, we need to be mindful of the things that come out of our mouths because we are going to be questioned about these things.

** Quote:  From Ibn Qayyim Al-Jawziyyah:  “Every gulp of air, that goes out in a cause other than the cause of Allah (SWT) will turn to sorrow and regret on the Day of Judgement.”

It’s easy to open our mouths and say whatever comes to mind.  But how hard is it for us to keep our mouths shut?  To keep our bad words to ourselves?

How many times have we opened our mouths and let something out, and then wished we could take it back, wish we could undo the harm that we had done with our tongues.

It only takes a few seconds to undo with our tongues what may have taken years to build up.

I said: “O Messenger of Allah! Inform me about a matter that I may hold fast to

He said: ‘Say: My Lord is Allah, then be steadfast

I said: “O Messenger of Allah! What do you fear most for me?”

So he took hold of his tongue and said: ‘This.’”

Brothers and sisters, our tongues our destroyers!  They destroy our good deeds, our good works.

**  It is reported that a man saw Ibn Abbas (raa) holding the tip of his tongue saying:

“Woe to you, say what is good and you will reap gain, and be silent from speaking evil and you will be safe.”

The man asked him, ‘O Ibn Abbas, what is the matter that I see you holding the tip of your tongue saying such and such?’

He replied; “It has reached me that the servant of Allah will not be as angry at anything on the Day of Resurrection, as he will be at his tongue.”

**  Umar ibn Khattab (ra) once entered upon Abu Bakr (ra) and found him pulling at his tongue.  He said, “Oh, what are you doing?”

Abu Bakr replied, “It is this (his speech) that has brought me so much trouble.”

** Al Hasan al Basri (rh) said; ‘The intelligent person’s tongue is behind his heart; when he wants to speak, he first thinks.  If his words will be in his favor, he says them, and if they will be against him, he does not speak.

And the ignorant person’s heart is behind his tongue; when he merely thinks of saying something, he says it, whether it is for him, or against him.

Allah gave us two gates, checks, locks…our lips and our teeth (props to Bro. Hamza).  He has given us a chance to stop ourselves before we open our mouths to let something out.  How many of us could use a third lock?

**  Imam Ash-Shaafi’ee (rh) said, “Be aware of your tongue, it’s dangerous!  It’s like a snake, and sooo many people have been killed by their tongues.”

Brothers and sisters, guarding our tongues is a hard thing to do, and it’s part of our test.

Without a doubt, it’s a hard thing to do, and so we should ask Allah, over and over again to help us with this fitnah.  And with Allah lies all strength and success.

so he said:  “Taqwa of Allah, and good character

And he was asked about that for which people are admitted into the Fire the most,

and he said: ” The mouth and the private parts.”

Brothers and sisters, be mindful of the things that come out of your mouths because the things you say today, will be waiting for you on Yawmul Qiyamma.  And when you stand before Allah, you will have to answer for these words.  And this is why the Prophet (pbuh) advised us by saying that  he who keeps silent, keeps safe.

My dear and respected brothers and sisters in Islam, we need to work hard to guard our tongues because by guarding our tongues, we are helping to ward off the Hellfire from us.

a slave (of Allah) may utter a word (carelessly) which displeases Allah without thinking of its gravity and because of that he will be thrown into the Hell-Fire.

“And do not backbite one another.  Would one of you like to eat the flesh of his dead brother?  You would hate it (so hate backbiting).  And fear Allah.  Verily, Allah is the One who forgives and accepts repentance, Most Merciful.”

**  Imam Bukhari and Imam Muslim, have both related,

Narrated Abu Musa:  Some people asked Allah’s Messenger (ﷺ), “Whose Islam is the best? i.e. (Who is a very good Muslim)?” He replied, “One who avoids harming the Muslims with his tongue and hands.”

**  Abu Dawud recorded that Abu Hurayrah said that the Messenger of Allah said,

(All of the Muslim is sacred to the Muslim, his wealth, honor and his blood. It is evil enough for someone to belittle his Muslim brother.)

Brothers and Sisters, don’t backbite one another.  Don’t talk about your brothers and sisters, unless it’s something good.

And the definition of backbiting has been explained in a Hadith collected by Abu Dawud that Abu Hurayrah said, “It was asked, `O Allah’s Messenger! What is backbiting’ He said,

(Mentioning about your brother in a manner that he dislikes.) He was asked, `What if my brother was as I mentioned’ He said,

(If he was as you mentioned, you will have committed backbiting.    But if he was not as you say about him, you will have falsely accused him (slandered him.)”

Backbiting was sternly warned against, and this is why Allah the Exalted and Most Blessed compared it to eating the flesh of a dead human being,

Brothers and sisters in Islam, be careful of what comes out of our mouths!

** Quote:  From Amr ibn Al-As (ra) :  Words are like medicine, little is enough and too much destroys you.

Brothers and sisters, guard your tongues, and measure your words.  Think before we open our mouths and don’t backbite one another.  And I know that it’s a hard thing to resist, but bite your tongues if you have to, because on Yawmul Qiyamma, you’ll be wishing that you had.

Abu Said Al Khudri said:  The Prophet (pbuh) said, “When the son of Adam gets up in the morning, all the limbs humble themselves before the tongue and say: ‘Fear Allah for our sakebecause we are with you: (i.e., we will be rewarded or punished as a result of what you do) if you are straight, we will be straight; and if you are crooked, we will be crooked.”

Subhanallah.  Brothers and sisters, think about this for a moment.  Prophet Muhammad (pbuh) is telling us that our own bodies are afraid for us for what our tongues may do.  They warn our tongues to fear Allah, and they seek refuge from the evil that they may send forward.

So my dear and respected brothers and sisters in Islam, I encourage us all to guard our tongues, and fear the day when we will be called to account for the things that we have said.

I ask Allah to help us to benefit from what we have heard here today.

And to help us to guard our tongues.

And I ask Allah to turn to us with Forgiveness and Mercy on the day that we meet Him, and to exchange our places in Hellfire, for places in Jannah.