Harvard Law School, one of the most prestigious institutions of its kind in the world, has posted a verse of the Holy Quraan at the entrance of its faculty library, describing the verse as one of the greatest expressions of justice in history.

Verse 135 of Surah Al Nisa (The Women) has been posted at a wall facing the faculty’s main entrance, dedicated to the best phrases articulating justice:

“O you who have believed, be persistently standing firm in justice, witnesses for Allah , even if it be against yourselves or parents and relatives. Whether one is rich or poor, Allah is more worthy of both. So follow not [personal] inclination, lest you not be just. And if you distort [your testimony] or refuse [to give it], then indeed Allah is ever, with what you do, Acquainted” 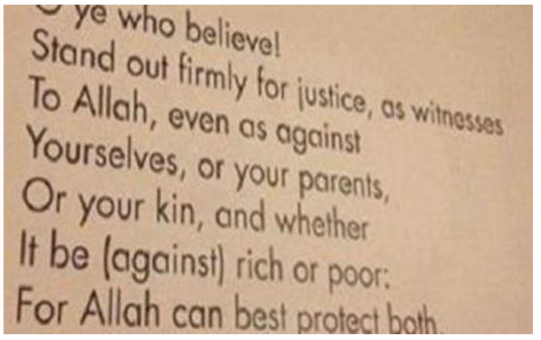 According to a Saudi daily, a Saudi student who studies at Harvard first highlighted the development when he published a picture of the display on his Twitter page.

“I noticed that the verse was posted by the faculty of law, which described it as one of the greatest expressions for justice in history,” Abdullah Jumma said.

Established in 1817, Harvard is the oldest continually-operating law school in the United States and is home to the largest academic law library in the world. Among its alumni is US President Barack Obama and a host of influential journalists, writers, media and business leaders and even professional athletes.

According to its official website, The Words of Justice exhibition is a testimony of the endurance of humanity’s yearning for fairness and dignity through law. “The words on these walls affirm the power and irrepressibility of the idea of justice.”

There are approximately two dozen quotations on display in the art installation created by the Law School. The three most prominently displayed at the entrance of the art installation, are quotes from St. Augustine, the Holy Quraan and the Magna Carta. According to the Harvard Law School these quotations illustrate the universality of the concept of justice throughout time and cultures.

Quotations were selected from a pool of over 150 contributions from law school faculty, staff and students. Librarians at the Law School Library researched the historical context and authenticity of each quotation and developed a website to share this research with visitors to the art installation.

JOE ROGAN AMAZED by guy who was gonna BLOW UP a Mosque BUT THIS HAPPENED!

HIDDEN MIRACLE – AMAZING !! (He cried in front of the cross and watch what happened next)