(NaturalNews) If you’re reading this, there’s a good chance that you have a tattoo. After all, nearly half of the population has decided at some point in their life that it was a good idea to permanently ink an image, or special symbol, onto their skin. Many hold no regrets when it comes to their tattoos; however, others embrace them less so with age.

But now there’s a new reason to rethink getting inked. Have you ever considered exactly what tattoo ink is made of? The ink is really pigment, and most are made of metal salts; however, some are made of plastics or vegetable dyes, and if organic, they’re usually plant-based. 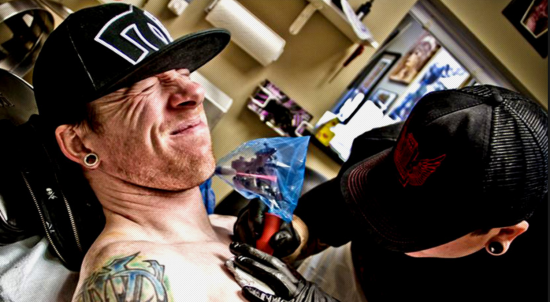 Body-art lovers have complained of scarring, allergic reactions, and phototoxic reactions (adverse reaction to light or sunlight), and depending on the type of pigment, other complications can occur. Brightly colored plastic-based pigments have been particularly problematic for some, and glow-in-the-dark tattoos can be radioactive and toxic.

Tattoo parlors are regulated by the state and city, but the U.S. Food and Drug Administration (FDA) does not require manufacturers to release their ink’s ingredients; doing so could supposedly give away trade secrets.

The lack of regulation is slightly unnerving considering that 36 percent of people ages 18-25 have tattoos, as do 40 percent of those 26-40 years old. That means approximately 45 million Americans have been inked, and one-third of those did so because it makes them feel “sexy.”

Unfortunately, what makes you feel sexy now, could possibly make you feel sick later. The chemicals and heavy metals in tattoo ink can cause various forms of cancer, birth defects, certain mutations, and be destructive to your immune system.

Although rare, some people might experience swelling or burning in the tattoo while receiving magnetic resonance imaging (MRI), according to the FDA.

A team of researchers is working with an Arkansas-based FDA laboratory to learn more about the chemistry between tattoos and the body. Chemist Paul Howard, Ph.D., with the National Center for Toxicological Research (NCTR), is investigating the “chemical composition of the inks and how they break down (metabolize) in the body.”

They’re also looking at the short-term and long-term safety of tattoo pigments, and how the body responds to the interaction of light with the inks.

“There have been no systematic studies of the safety of tattoo inks,” said Howard, “so we are trying to ask–and answer–some fundamental questions.”

Part of the team’s research is to understand what happens to tattoo ink when it’s exposed to sunlight and fades over time. “Where does the pigment go?” asked Howard.

Some experts theorize that body cells digest and destroy the ink, ridding themselves of bacteria and other foreign matter as a defense mechanism. Yellow 74 pigment is believed to be broken down by enzymes, or metabolized, similar to the way our bodies excrete other substances, according to NCTR research.

Sunlight breaks down the pigment Yellow 74 into colorless compounds that, while invisible, most likely still remain in the skin and could potentially be toxic.

Research has also shown that some pigment migrates from the tattoo site to the body’s lymph nodes, explained Howard.

“Lymph nodes are part of the lymphatic system, a collection of fluid-carrying vessels in the body that filter out disease-causing organisms. Whether the migration of tattoo ink has health consequences or not is still unknown,” states the FDA’s website.

Further research is definitely needed to fully understand the effects of tattoos; however, it’s worth considering next time you think about getting inked.

Double Standards with Ukraine Russia VS Israel-Palestine – If You Only Knew!

Texas Cowboy does something amazing after reading the Quran

Muslims In America – The *BIGGEST* LIVE Online Event! (Why We Need The Deen Center)

Black Magic Amulets in Africa | Africans asked whether Men could be Women?