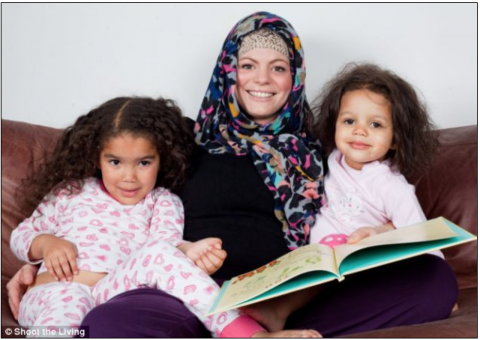 Her conversion from Ibiza party girl to hijab-wearing Muslim in barely three months may well raise a few eyebrows – and she admits that her friends probably think it’s another one of her fads.

But trainee teacher Heather Matthews, 27, says Islam has brought her ‘love and happiness’ that she never found in her old ‘shallow’ lifestyle.

Mrs Matthews, a mother of two, converted to the faith four weeks ago – two months after returning from a holiday in Ibiza. And she says that the photographs of the ‘old her’ taken on that trip show all that is wrong with Western images of beauty.

She said: ‘I thought I needed to act and dress in a certain way to feel good about myself. I see girls now and think about what image they are portraying to other people, especially men.

‘Islam has taught me about real love, not false passion and lust. I can even see the logic in arranged marriage.’

A study by multi-faith group Faith Matters found the number of Muslim converts in Britain has now passed 100,000, doubling in ten years.
The report estimated nearly two-thirds of the new converts were women, with an average age of 27 – like Mrs Matthews.

Her path to conversion began when she tried to convince her ex-husband Jerrome, himself a Muslim convert, that the religion was wrong. She was ‘very suspicious’ of the faith, and began reading up on it to support her arguments.

Although they separated last year, she continued to learn about Islam – and identified with it more and more. Then, four weeks ago, she completed the ‘revert’ process. She said: ‘I underwent the ‘Shahadah’ ceremony of conversion to Islam by repeating a declaration of faith in front of the Imam at my local multi-faith centre.

‘I had several Muslim sisters with me and they bought me a hijab and Islamic books to celebrate. It was wonderful.’

Before Islam: This picture of Heather was taken earlier this year on the party island of Ibiza, which she now says shows everything that is wrong about Western beauty

But she admits that her friends have been shocked at her conversion to a religion which is often seen as being oppressive towards women.
‘People are probably thinking “Oh, it is just another one of Heather’s fads”. It isn’t. It is what I’ve been searching for during the times I’ve been filling my life with instant gratification,’ she said.

Mrs Matthews, from Preston, has also had a cautious reaction from her family. But it is the response from passers-by that surprised her the most – especially the effect of her headscarf.

‘No men try to chat me up. It is an idiot repellent. When I’m wearing the headscarf I can smile at people without them thinking it is a sexual advance,’ she said.

‘I definitely agree with Islam’s principles of not having sex with someone you’re not married to and to save your beauty for your husband. So I think my next partner would need to be a practising Muslim to understand.

‘It is easy for me to say this now, with hindsight, having made the mistakes, but I think I would have been better off with partners who my parents thought were suitable, learning to love them through friendship first.’ Mrs Matthews has given up alcohol, sticks to a halal diet and plans to fast during Ramadan. She has an English-language Koran which she reads daily, and wants to learn Arabic so that she can recite prayers five times a day.

But she will not be forcing Islam on to her daughters – Ellah, five, and two-year-old Halle – from her marriage to Jerrome.

‘People think I must be oppressed but I’m a strong, confident and free woman,’ she said. ‘I know I’m one of the most unlikely people to revert to Islam.

‘It astounds me. But I’ve done it for love and happiness and it has completely changed my life.’

Drake GETS INVITED TO ISLAM (and hot sauce Instagram model)